The Unitarian Church of Meadville was established in 1825 and was formally organized in 1829 as the Independent Congregational Church. A subscription list of thirty-two names attached to a statement of Fundamental Principles included representatives of the Huidekoper, Cullum and Shippen families. These three families had important roles in the church’s early history: Harm Jan Huidekoper established the church; Margaret Shippen and Harm Jan Huidekoper provided the congregation with land; and George V. Cullum designed the building which is now its home. Plaques which commemorate their dedication are located in the church sanctuary and are reproduced in this text. 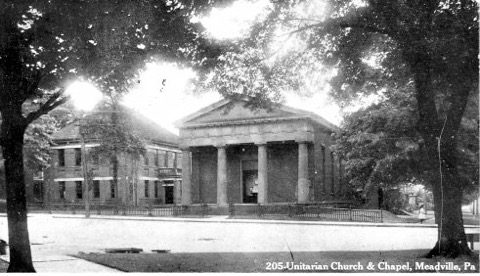 The name of Meadville became widely known in liberal religious circles through the existence here of an important religious institution, the Meadville Theological School, founded in 1844 in great part through the efforts of Harm Jan Huidekoper and his sons. Meadville thus was the temporary home of hundreds of young men who became Unitarian ministers and supplied pulpits all across the nation. The school remained here for 82 years, but in 1926 was moved to Chicago as an entity of the Federated Theological Faculty of the University of Chicago, where it preserves the town’s memory in its name: the Meadville-Lombard School.

The importance of Meadville as the site of a vigorous early Unitarian community and as the location of an important theological center, is still recognized today in the name of the Unitarian-Universalist denominational division in which we are located: the Ohio-Meadville District.

This service celebrates the work done by Ian Carbone and his Allegheny College students to install a solar power array on the Parish House roof.  Come hear about the challenges the students faced and the successes they achieved.  Our church’s vision of partnering with the community has become a reality!  You’ll have the opportunity to preview a short … Continued